‘Do you know why our determined effort to provide prisoners with rehabilitation and reintegration cannot lead to a decline in recidivism?’

The above question arises when the recidivism rates of released prisoners in the past 3 years do not show a significant decrease despite there are many rehabilitation and reintegration schemes and projects for prisoners: vocational training; training behind bars by private enterprises and sending prisoners to work in the companies outside; self – employment training; Changing Lives by SMEs; In – depth SMEs Training; establishment of Center for Assistance to Reintegration and Employment or C.A.R.E to coordinate with private sector to provide prisoners with jobs upon release; pre – release programs; startup funds for pursuing future careers, and so on. According to the statistics in Table 1, within 1 year after prisoners’ release in 2015, there are 14.62 per cent of returnees to prison. As for 2 and 3 years after their release, the figures of returnees stand at 25.79 per cent and 34.95 per cent respectively.

However, such data do not mean that rehabilitation and reintegration activities of Thailand’s Department of Corrections are regarded as a total failure. On the other hand, there are various successful programs which can help prisoners to change their lives in a better direction. These days prison is normally recognized as a ‘Life-changing House’ as prisoners can advance their studies and skills in many positive ways: illiterates become literate persons; prisoners obtain Bachelor’s Degree; prisoners are equipped with skills to work for their livings, such as foot massage, cooking, coffee making, working in private enterprises; prisoners are also trained with life skills, such as meditation, financial management, and socialization. All prisoners can gain benefits from participating in these programs, especially for improving their quality of lives and having better life choices which shall in turn lessen the opportunity for reoffending.

If this is the case, then why the recidivism rates of Thailand’s Department of Corrections in three years do not cut down? This doubt can generate next two questions as follows:

Q 1: Do we allocate rehabilitation and management resources to the right group of prisoners?

This is about the type of prisoners on that we have focused. If we separate prisoners into 3 groups as explained in one of Buddhist teachings comparing the types of lotus to different types of people, there are, firstly, persons who are like the lotus buds emerging the surface of water in the pond and receiving the sunshine. To illustrate, they are just unintentional criminals who made a life mistake. These prisoners tend to have good families, decent jobs and readiness for returning to society at a slight risk to reoffend.

The second group of prisoners is like the lotus buds in the water that need some sunlight or enlightenment. Contrasting with the previous type, these prisoners may face higher risks to reoffend but there is still a sufficient room for rehabilitation.  The next group is the prisoners who can be compared to the lotus buds deeply submerged in a mud at the pond bottom. These prisoners are very difficult to change as a result of growing up from poor socialization and negative environment. Hence, it is impossible for them to be rehabilitated within 1 – 2 years behind the prison walls.

In fact, the third group of prisoners is likely to encounter several limitations to rehabilitation programs. To begin with, the prison authorities tend to predominantly concentrate on providing the first and second groups of prisoners with meaningful rehabilitation and reintegration in spite of the fact that the third group actually requires more to receive an intensive training scheme. Also, these prisoners tend to be ineligible for gaining benefits from such rehabilitative activities. To give some examples, they cannot be conditionally released on parole since they do not have a proper guarantor. Moreover, they are not selected to participate in any work schemes in private companies due to lack of skills and undesirable behaviors which can affect bad reputation of the project. In some cases, they are not qualified for obtaining startup funds. As a matter of fact, some of these prisoners are not even full of determination to attend rehabilitation programs for developing themselves but mostly for becoming eligible for class promotion. Accordingly, the recidivism rates of released prisoners in 1 year, 2 years and 3 years, have not been decreased since such group of prisoners tends to keep going in and out of prison. 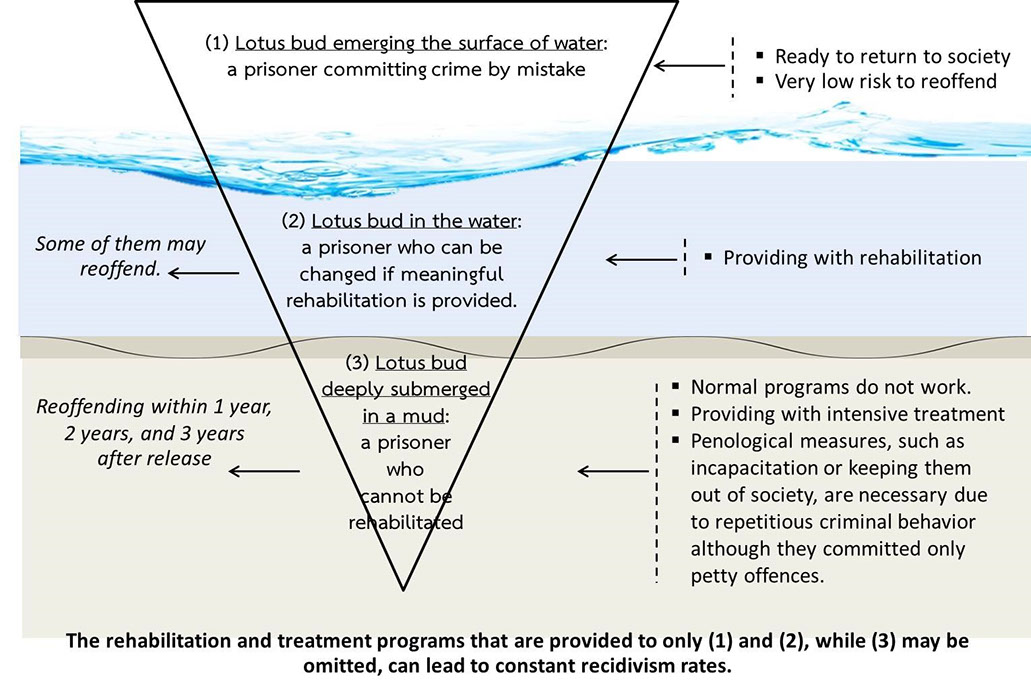 Q 2: How can we put all efforts to manage the third group of prisoners or the lotus buds deeply submerged in a mud in order to reduce recidivism rates?

To achieve such goal, there are 2 cases which have been already performed in other countries. The first case is to provide prisoners with intensive and long-term treatment programs by aiming at lowering reoffending rates. In Singapore, the hard core prisoners are specially trained in a

10-month intensive pre-release program which can effectively change prisoners to certain degrees. Moreover, the Therapeutic Community (T.C.) which is a 2-year drug treatment program in USA can contribute to the reduction of recidivism rates of drug offenders despite it is just a slight decrease. Because of this, another measure to cut down recidivism figures in USA is to keep prisoners out of society and detain them behind bars for a long period of time until their agedness and senility reduce the capacity to commit crime. For instance the three strikes laws, which have been enforced in many states in USA, require both a severe violent felony and two other previous convictions, even if a misdemeanor, to serve a mandatory life sentence in prison. In some states, the punishment shall be considered either by nature of violent offence, or background of offender. Thus, if the three strikes laws had been imposed in Thailand, there would not have been a case reported on the news of a man in Nonthaburi Province who physically assaulted their parents in August 2019. According to his background, he kept going in and out of prison for 6 – 7 times; each time was less than 1 year. In this particular case, if there was an adaptation for serving longer sentence, he would not have been able to commit further crime. Then, the recidivism rates shall be dropped.

IIn conclusion, the existing rehabilitation and reintegration programs of Thai prison system are successful in improving prisoners’ quality of lives and extending their life choices. Nevertheless, they do not directly affect the overall recidivism rates of released prisoners within 1 to 3 years. The crucial reason is that the groups of prisoners gaining benefits from such useful programs are those prisoners who already have very small risks to reoffend. On the contrary, prisoners who tend to be recidivists are not provided with appropriate treatment program due to lack of qualification and no intention to attend. To put it simply, the rehabilitative attempts cannot help them to change their negative behaviors. Only intensive and lengthy treatment, as well as penological measures in particular keeping them away from society for a long period of time, shall minimize the chance for them to recommit crimes or to become dangerous for society in the future.